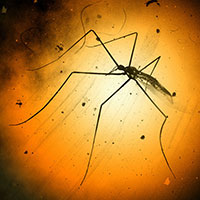 Guillain-Barré syndrome is a rare condition in which a person’s immune system attacks their peripheral nerves. In many cases there is a history of infection that causes the immune response in the nerves. People of all ages can be affected, but it is more common in adults and in males.

Most people recover fully from even the most severe cases of Guillain-Barré syndrome, but although less common and treatable, severe cases of the syndrome can result in near-total paralysis and death. Reportedly, between 3.5 and 12% of patients die from complications during the acute phase.

Several WHO Member States have reported important epidemiological data consistent with a temporal and spatial link between Zika virus (ZIKV) circulation and the increase of Guillain-Barré syndrome.

Given the increase of congenital anomalies, Guillain-Barré syndrome, and other neurological and autoimmune syndromes in areas where Zika virus is circulating, the Pan American Health Organization / World Health Organization (PAHO/WHO) recommends its Member States to:

During the Zika virus outbreak in French Polynesia (2013-2014), 274 patients had presented neurological syndromes or auto-immune syndromes after the manifestation of symptoms consistent with Zika virus infection. Of these, 42 were classified as Guillain-Barré syndrome (GBS). Of the 42 registered GBS, 24 (57%) were male, and 37 (88%) had signs and symptoms consistent with Zika virus infection (1, 2, 3).

In July 2015, Brazil reported the detection of patients with neurological syndromes who had recent history of Zika virus infection in the state of Bahia. There were 76 patients with neurological syndromes identified, of which 42 (55%) were confirmed as GBS. Among the confirmed GBS, 26 (62%) had a history of symptoms consistent with Zika virus infection.

In addition, on 25 November 2015, the Aggeu Magalhães Research Center of the Oswaldo Cruz Foundation reported that ZIKV infection was found in 10 of the 224 suspected dengue patients whose samples were analyzed for Zika virus infection. Seven of the 10 samples analyzed corresponded to patients with neurological syndrome.

In January 2016, El Salvador reported the detection of an unusual increase of GBS since early December 2015. On average, El Salvador records 14 cases of GBS per month (169 cases per year), however, between 1 December 2015 and 6 January 2016 there were 46 GBS recorded, two of which died. Twenty-five (54%) were male and 35 (76%) were over 30 years old. All were hospitalized and treated with plasmapheresis or immunoglobulin. Of the deceased patients, one had a history of multiple underlying chronic diseases. In 22 patients whose information was available, 12 (54%) had febrile rash illness between 7 and 15 days prior to the onset of GBS.

Currently, similar situations are being investigated in other countries of the Americas. These findings are consistent with a temporal and spatial link between Zika virus circulation and the increase of GBS. Although the etiopathogenesis and associated risk factors have not yet been well established, Member States should implement surveillance systems to detect unusual increases in cases and prepare health services for care of patients with neurological conditions.

GBS treatment is symptomatic and supportive. Recovery can take several weeks or months and can often cause prolonged disability requiring rehabilitation by a multidisciplinary team (doctors, nurses, physiotherapists, etc.).

People with Guillain-Barré syndrome should be treated and monitored; some may need intensive care. Treatment includes supportive care and some immunological therapies. GBS patients are usually hospitalized so that they can be monitored closely.

Given the autoimmune nature of the disease, the treatment strategy used in the acute phase is immunotherapy, such as plasma exchange and intravenous immunoglobulin. Corticosteroids given alone do not significantly hasten recovery from GBS or affect the long term outcome.

The aim of plasma exchange is to remove from the bloodstream antibodies and replace them with artificial plasma, usually albumin. Plasma exchange is most beneficial when initiated within 7 – 14 days from onset of the disease.

Intravenous immunoglobulin hastens recovery, as does plasma exchange, and it is much easier to manage. It should begin within two weeks from the onset of symptoms.

Even under the best quality available medical care, approximately 5% of patients with Guillain-Barre syndrome die from complications such as sepsis, pulmonary embolism or unexplained cardiac arrest. Thus, these complications must be identified early by healthcare workers, with frequent monitoring of vital functions and prevention of pulmonary embolism.

Whenever possible, it is advisable that patients with Zika virus infection, suspected to have Guillain-Barré syndrome should always be treated in an intensive care unit in order to maintain continuous monitoring and to respond immediately to any urgency or signs of complications.